Proposal to change the multipliers of PGOV farm due to instability of the PGOV price, which influences the APRs.

Price fluctuates strongly because of the low liquidity in the LP. Although this LP has a huge APR, there are not many people wanting to join. The reason is that even if the daily APR is over 10%, it doesn’t mean much when the price is falling 4x faster than the rewards are making up for it.

Let’s dive deeper and break down the rewards of 150 per block. Multipliers are used to distribute/divide these rewards among all the pools according to a certain ratio. Changing the multipliers doesn’t change the total amount of rewards released per block, it only changes the ratio.

Currently there are 10 pools, of which only 2 are with locked/vested rewards, so they are not the ones who can sell.

Low liquidity in the LP means the price greatly fluctuates, it can dump or rise very fast. If you don’t entice the LP with the highest multiplier, the experienced farmers are simply not going to join, meaning the liquidity stays low.

The LP multiplier of most projects have set it at the highest, it’s the most dangerous one with IL so it should be rewarded the most.
In this case we have BZRX as the highest, but it is locked/vested, so it’s not a problem (yet!), but the LP should at least be the highest of all the other unlocked pools.

There are a few possible solutions to this:

My proposal is a quick fix using only the multipliers, a combination of 1&2, because setting a vesting schedule is a big change of the rules and is going to be frowned upon by the community.

New ratio: 46,5x unlocked pools, LP will get 65% of the unlocked rewards. This will boost and compensate the current LP stakers.

After enough liquidity has arrived and the stablecoin pools need a boost because of the high demand of stablecoins on fulcrum platform, we can increase the stablecoin multipliers to 10x. This will give LP 53% which should be a nice equilibrium until the vested pools come into play.

Edit after consultation with community members and to make it look better marketing-wise.

Proposal to change the PGOV farming multipliers as follows:

LP pool to increase from 20x to 60x.
The two stablecoin pools will drop to 10x each.
All other pools will remain unchanged.

At a later stage the multipliers can be adjusted again if the any of the pools need to be incentivized more.

Agreed. We need this done asap!

Lets get this done.
I would vote for it.

This was horribly designed tokenomics from the start. There is no reason to borrow money on Fulcrum at these rates neither (which means platform isn’t generating any profit), Fulcrum has 12% on borrowing USDC, AAVE has 3%. This will die sooner than team manages to react.

Not to mention there is literally ZERO info on emission and vesting period (which also aren’t clear from farming website). How hard is it to put at least VESTING tag on a pool? 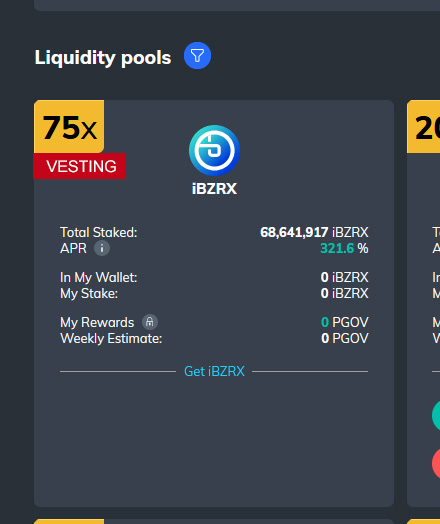 Just to be perfectly clear, above changes needs to be implemented ASAP, also platform usage needs to be increased as well

Thanks for the support guys. And I agree with the documentation, when you start a farm, you need to have:

I would like to see the multipliers changed. Does someone want to do a poll or vote in the TG groups to see what we can put down as a final draft?

I appreciate you geting this together. It makes logical sense. If the community would like to share their thoughts, we can get the first part of this proposal up for a vote.

I agree. Let’s get this done asap!

It’s not hard to put a label, you are right. Although there is a small lock icon next to “my rewards”. Quite discreet but it’s there nonetheless.

Now I can tell you what is hard: having a global shutdown of AWS with at the same time a disastrously unstable blockchain like polygon that made everything 2 times more complicated. That lead to a lot of efforts redirected to come up with solutions to deal with those issues while users think our apps are the issue.

Well, you are right, putting a more prominent label isn’t hard, but it was the least of any concern given the above. That said, it will be improved, thanks for feedback.

Very well written approach. Proper constructive feedback. I will vote in favor of this proposal.

Personally it saddens me to see the BZX platform to take this road. The priority of launching another chain in these circumstances is a poor decision imo. Why? I see no point in broadening your platform with multiple chains if no-one (users) know about your platform. Than there is no point in creating liquidity or make governance tokens, you will be ruling over the dead.
Rebrand first , than expand your platform.
However, for PGOV the rebrand option has passed, now we need to fix PGOV. This proposal does it perfectly, my vote you have.

PS: to continue on a comment above: Having a marketing team of at least 3 people and having such a week twitter presence blows my mind…

I fail to see how your reply is relevant to the post made by bisti, beside the vesting tag. Seems bisti hit a sore spot there? Your reply actually did quite trigger me. As if these excuses are the cause of the need for this proposal or the state of frustration in the community.

So please tell me how long did the AWS problem exist?

I am sorry, but these are short term hiccups along the road. You cant tell me that everything is compromised by a 1 time event. And if it did, well the dev team is in worse shape than it should be in 3 years with the funds it has.
Either it is:

My best bet is that the dev team is to small and is dealing with too many unnecessary things like new chains, instead of focussing on the rebrand. Expand the team to something which is vast enough to deal with these situations and to stop from having to vague announce weak deadlines.

To be sure before people get too sour: I love the platform and the team, but i believe this feedback is needed.

I wanted to comment that many things happened that made the development more complicated so there are a couple of details that couldn’t be polished since we promised to release farming at that time. I didn’t comment on the proposal itself. I agree these changes of tokenomics are needed.

Agree with the proposal:

LP pool to increase from 20x to 60x.
The two stablecoin pools will drop to 10x each.
All other pools will remain unchanged”

Thanks for putting this well thought out proposal up Audax. I definitely support this.

another one. with the solution in the first post it would be fixxed…

Yeah it definitely will be fixed if this gets implemented, but it needs to happen soon!

We had some more discussion with several community members about the two different multipliers for lp and stablecoins. Our conclusion is an intermediate outcome.